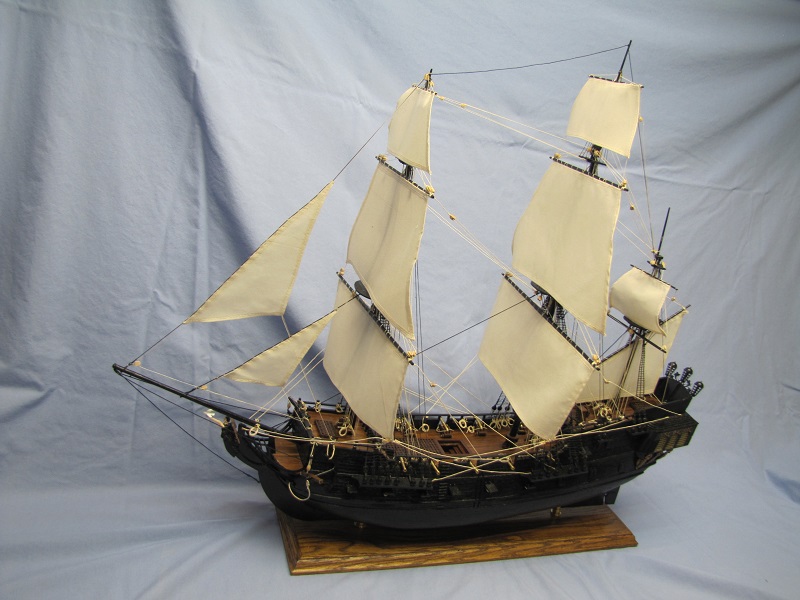 After an avid model builder and collector passed away last year his wife donated all of the models,
kits, building supplies, etc. to MMM  to be purchased by our
members.  Any proceeds were to go back to the club.  The only thing she
asked was that one of his kits be assembled and returned to her as a
remembrance of her husband.

The model we chose was the Black Pearl.  It was completed and
a protective case made for it.  Today it was delivered to her and she
was extremely happy with it.  You could say elated.

As always, David’s work is exquisite and you can see this from the photos on David’s website https://dnelson.ca/Black_Pearl.htm

On the website, David included this fascinating history of the boat:

The Black Pearl is a legendary ship that appears in Disney‘s Pirates of the Caribbean film series. Easily recognized by her distinctive jet black hull and sails, the Pearl is first introduced in the film Pirates of the Caribbean: The Curse of the Black Pearl and has appeared in the following sequels, Dead Man’s Chest, At World’s End, On Stranger Tides, and Dead Men Tell No Tales. Among other appearances, the Pearl appears in The Legend of Captain Jack Sparrow attraction at Disney’s Hollywood Studios, as well as several books and video games.

In the past, the ship was originally named the Wicked Wench, under the command of Jack Sparrow. However, Jack’s employer, Cutler Beckett, later ordered the Wench to be set aflame and sunk. As part of a deal with Davy Jones, the ship was raised from the depths, and Jack was given thirteen years as captain, in exchange for 100 years of service aboard the Flying Dutchman. With the Wench’s new charred look, Jack rechristened her the Black Pearl. Now an infamous pirate vessel, the Black Pearl would embark on many adventures on the high seas.